Note: This story centers a lot around the Radio Kaikan building in Akihabara, right outside the JR station. If you haven’t heard, to damage from earthquakes, particularly the M9.0 in March 2011, and built at a time where building codes to withstand it are not as stringent as today, the building has been dismantled since July. It would be rebuilt with modern building codes by 2014. Most of its tenants has moved to 3 buildings nearby.

Steins;Gate centers around time-travel and “world lines” (different course of routes resulting from a particular action if something at a particular point in time happened, did not happen, or happened differently). It centers around Okabe Rintarou, Mayuri, Makise Kurisu, and Akane Suzuha. It mostly takes place at their “lab”, which is just a rented apartment unit above a CRT store, but Radio Kaikan is an important place relating to events.

I liked how the anime was expressed, the suspense of mysteries and wanting to know more at the end of each episode. It managed to describe the complexity and paradox of changing the past. At times, I even found myself shocked of what has been revealed during the anime for the first time, if it weren’t for the spoilers from the visual novel it’s based on.

Steins;Gate is one of the best anime that I’ve seen so far for this year that ranks among anime like Purella Magica Madoka (魔法少女まどか), and Anohana (あの日見た花の名前を僕達はまだ知らない。). It managed to stray away from the norm that are quite predictable, obvious filter episodes, and at the same time, has good storyline, and attention to detail. Character design could still be improved on, but is enough to overlook on because of the good storyline. 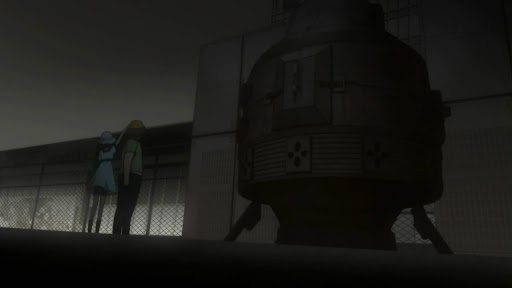 With regards to the paragraph at the very top of this post, I had to say it because phrases such as “since it can’t change places while time machine, this time machine remained at the same spot” would conflict with a newer, taller, building in its place if referred to in real life, with about a 20 year gap of the time Suzuha came from.